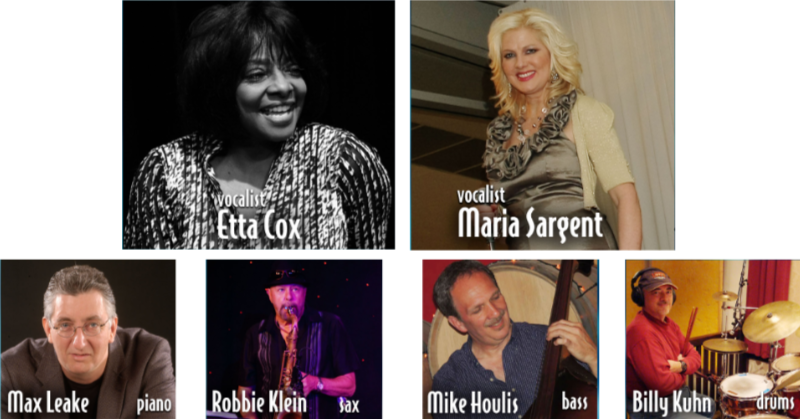 The Pittsburgh Jazz All Stars Extravaganza is a celebration and showcase of some of Pittsburgh’s most notable performers:

Etta is one of Pittsburgh’s “living treasures.”

Maria Sargent (vocals) is a celebrated singer in the jazz scene and musical nightlife in the Pittsburgh area. Maria wows audiences with her smooth voice and sings a wide variety of music styles. Her repertoire includes styles from jazz to pop and everything in between

Max Leake (piano) is the longtime pianist for Roger Humphries and RH Factor and has accompanied a who’s who of local and national artists. He is also an adjunct professor of jazz piano at Duquesne University’s Mary Pappart School of Music.

Robbie Klein (sax) is one of the region’s most sought after sax players. He created and hosted the Jazz Cruises on the Gateway Clipper Fleet for 12 years and played the Kool Jazz Festival and Mellon Jazz Festivals. He has opened for many major R&B acts as well as being a solo act at Star Lake Amphitheater for 3 years. Robbie has worked with Pittsburgh Cultural Trust, Three Rivers Arts Festival for many years.

Mark Strickland (guitar) is a legendary jazz guitarist from Pittsburgh whose smooth style is reminiscent of his influences George Benson, Wes Montgomery and Kenny Burrell.

Mike Houlis (bass) is one of Pittsburgh’s finest bass players. On the scene since the 1970s, he has backed up numerous local and national artists.

Billy Kuhn (drums) has been drumming since age 4 and playing professionally since age 13. He has performed and recorded with a who’s who of local and national jazz musicians including Eric Kloss, Joe Negri, Kenny Blake, Jimmy Bruno, Gerald Veasley, Steve Bailey, Sean Jones. As a member of Duquesne University’s renowned guitar ensemble, Catch 22, he performed in Europe, Jazz at the Smithsonian, and Jazz at Lincoln Center.