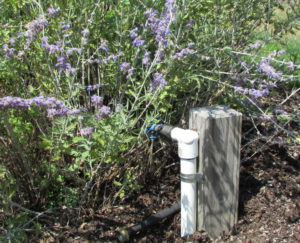 In 2011, The Monroeville Foundation was approached by one of the scouts in Troop 143 with plans for his Eagle Scout Leadership Service Project. His project consisted of constructing a water irrigation system at theBotanical Gardens in Monroeville’s Community Park West. The Monroeville Foundation granted $657 of the funding for his project, which provides a watering system for the botanical garden area of the park. the project benefited the community and helped the Scout earn his Eagle Scout.

For the project, the Monroeville Foundation helped Jonathan complete the work on the community park’s botanical gardens for tapping into the park’s current water system and running irrigation to eleven of the twelve floer beds. Each bed had an underground valve box to host the values so that the people who water the plants could connect up soaker hoses to run and water the gardens. The Foundation funded all materials for Vinyl Pipe, Valves, Trencher, Valve Box, Soaker Hose and Adapters.