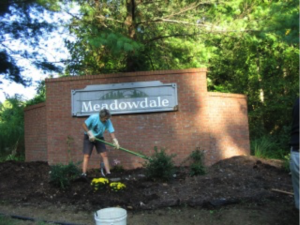 ONeighbors in Monroeville’s Third Ward came together over concern of the way their their neighborhood entrance plan had deteriorated. Years of forgotten upkeep around twin brick entrance walls resulted in heavy weed and vine overgrowth. They learned of the Monroeville Foundation’s neighborhood grants through their member of council and applied for a grant to cover refurbishing costs (up to $350). They decided drought resistant perennials, some bulbs and other colorful ground covers would require less upkeep, once neighbors came together. Grant costs still came in under budget to acquire weed barrier materials, plantings and ground cover planting purchased from a local nursery. The result was a success. During the work, the entranced problem also called attention to the steep slopes that were felt a danger. This prompted the municipality to install guide-rail (obtained from the country at no cost). Meadowdale neighbors got a brand new entrance look and safer entry to the neighborhood. Neighbors who were not physically able to dig the soil helped to raise money for a new “Meadowdale” sign for both brick walls.